A WILLOW TREE AND A REVELATION, OUTSIDE DALHART, TEXAS 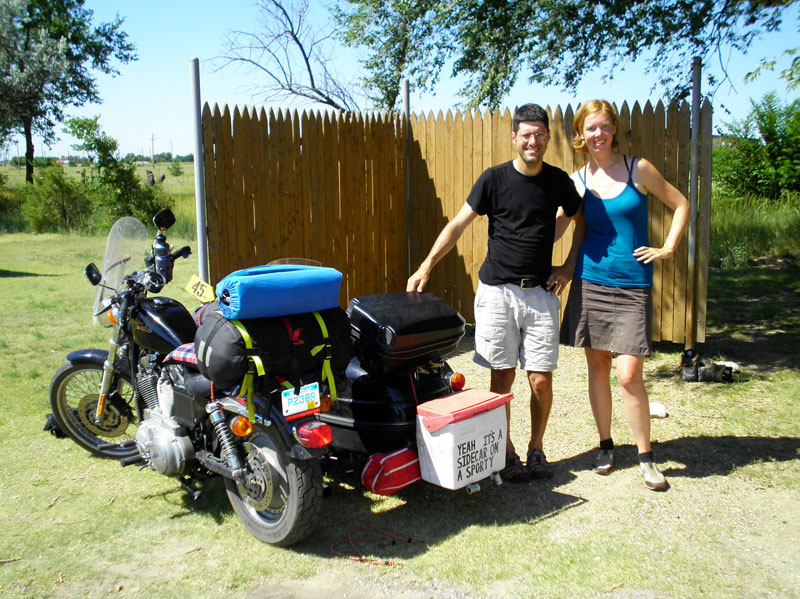 My camp mates Gilbert and Martine  in Clayton, New Mexico at the KOA campground.

July 13
West of Dalhart, Texas
DALHART, TEXAS, IS LOCATED 40 MILES from the New Mexico border, at an elevation of 3,984 feet. This morning, the Surly and I begin our trek towards Clayton, New Mexico, across 52 miles of the most open, sparsely populated geography of the trip. I left my riding partner, Tim Trepanier, in Lufkin, Texas, some 770 miles earlier, and today I miss his company more than at any point since we parted ways. Having Tim’s company made the journey lighter and far less burdensome. His presence insulated me, like a blanket, from the chill of the lonesome highway. Most days, we rode for miles without speaking to one another, but simply knowing Tim was ahead or behind held its own comfort—especially when the journey was at its most arduous because of weather, heat, terrain, or simply my own inner demons.

I discovered early on that riding solo weighs heavily on one’s mental capacities. To my utter surprise, the physical requirements I endure each day are not the hardest part of this journey. The real uphill climb is maintaining a positive mental outlook. The space between my ears is the vast landscape that stands between me and my final destination. Each day, this unseen battleground is the thing that chaffs most incessantly, urging me to give in to its negative demands. I’ve begun to view this journey as a contest: the physical me against the mental me.

I am neither a scientist nor researcher, but I’ve come to believe the friction between mind and body creates its own effluent. A dark matter, if you will, that leaks slowly into my physical system with every pedal rotation I make. It’s funny, for the most part, I can meet the challenge of the steepest climb, the hottest day, or the thought of the endless hills yet to summit, but the bi-product of my own chemical exhaust seems Hell-bent on polluting the positive state of equilibrium I try so hard to maintain.

On the western edge of Dalhart, I stop briefly at a convenience store across the street from a large grain silo to fill my camelback with ice and purchase extra bottles of water—just in case I need them. The air is dry as toasted straw and the sun already a furnace, at nine in the morning. About five miles out of town, I find myself traveling through a sea of green cornfields that seemingly have no end. Giant irrigation wheels circle slowly, making green fields where dusty fields would normally inhabit the west Texas plain. Every so often, a crop duster zooms near the ground, then up again to make its next pass. I wave at the pilot a few times, hoping he might dip a wing in recognition, but he has more important duties on his mind.

Consulting my map for a brief moment tells me the next stop for food and other supplies will be Texline, Texas, almost 40 miles down the road. (I already knew this, but periodically checking the map for a new waypoint I might have missed is an invented distraction, a game I play to make the distance between me and my destination appear shorter.)

I established a routine early in the trip: I pedal approximately ten to twelve miles and then take a break of approximately ten to fifteen minutes’ duration. Usually, this is at a gas station that houses a small café where I can sit inside and cool down over an iced Gatorade or cold water and enjoy the much anticipated pleasure of human interaction. I then ride another ten or twelve miles before taking another break. This stop-and-start regimen may seem counterproductive to many cyclists, but with temperatures at or over 100 degrees for most of the trip, I’ve developed my own techniques in order to survive the heat of summer 2010. The upside is that my body likes the cadence, and during the afternoon I move with more fluidity, dropping into a groove that usually nets me longer distances before stopping.

On the ride from Dalhart, however, there are simply no places in which to stop and engage in my cool-down ritual. The temperature has climbed to 107 degrees, but I’ve failed to pass any opportunity to insulate myself from the oven-like heat that envelops me. Not a tree nor bush nor building. Finally, about six miles from Texline, I come upon a small farmhouse, with a meat-processing business located at the rear of the property. And standing like a beautiful vision out of some Southern Gothic fantasy, a large willow tree sways in the front yard as seductively as a mildly intoxicated debutante at a revelers’ ball. She is surrounded by a lush circle of green grass, and if I ever heard the spirit of Gaia call to me, she now beckons me to come lie with her.

Coasting down the gravel drive, my vision begins to blur, while arms and legs numbly surrender to the extremes of the harsh Texas elements. As I lean the Surly against the fullness of the willow’s trunk, I wonder if this is just an apparition. I remain by my bike for a few moments, testing the boundaries of my reality. Then a large man comes out of the meat-processing building, and from the look on his face, I can tell he realizes I’m in need of relief. My tongue is so dry, it takes a long pause to get the words out, but finally I am able to ask if I can just lie in the shade for a while and rest. He smiles and disappears for a moment, returning with an offering of a cold can of Dr. Pepper.

He motions, and I follow him inside, where I’m greeted by the rest of his family and co-workers who are seated around a small desk that looks completely out of proportion to their assembled size. It seems as if a ring of giants is huddling, for some unknown reason, around a miniature desk. Nothing seems right—except the can of cold Dr. Pepper. Surely, my spandex outfit and bike helmet must seem just as odd to them. Each is attired in jeans, cowboy boots, and a straw hat. But they are a sound bunch and give no indication that I am anything other than an ordinary traveler. They ask about my trip, and I sit with them for a few minutes, eyeing the small desk while enjoying the sweetness of the cold soda.

Later, I magically navigate my way to the tree with a plastic bowl of ice cube—another gift from the cowboy Magi. I lie on the green grass in a weird, almost akimbo position, rubbing my body with the frozen cubes and giggling quietly to myself, while willow branches sway hypnotically above. I stay unmoving in that position for almost an hour, listening to the wind and the drone of tires on hot pavement. As I come to, my mind returns to my journey and to an insight I had last night, in Dalhart.

Before this trip, my life was, at best, a state of controlled disaster. I was pulled in every direction a human being could imagine: business, finances, home, relationships, family. It seemed that all aspects of my life had converged into a perfect storm bent on eradicating any evidence of me. Time had become my enemy, and I felt as if my life was spiraling downward into a black hole. My health began to suffer, and during the past year, I realized something had to give. If I didn’t make a major change, I believed I would find myself sitting alone in a sterile doctor’s office, with plaid wall paper and bad art, listening to some thirty-something physician explain, The test results show an abnormality, Mr. Holborn. The end of life as I knew it.

I felt deeply, with an in-the-gut primitive resonance, that something must change. Now, beneath the lovely boughs of a weeping willow (most likely the only weeping willow within 500 miles), I realize I have made change happen. I’ve pulled myself out of the calamitous conditions that encircled me—and I honestly feel I have saved myself from a slow death. I sensed something shifting during the past 1700 miles, but the thing I now understand is this: My ride was not an escape, as some charged. It had in reality it had made me a witness. A witness to my own death.

Somewhere along the ribbon of asphalt that meanders like a vital vein, all the way from St. Augustine, Florida, I buried Hugh—or at least the old version of him, the Hugh who could not save himself from the life he had created. Now as the hot, dry wind of Texas blows upon me, melting the remaining cubes of ice into small rivers that run across the surface of my skin, a larger question looms in my mind: Who is this person that has survived—and what shall I do with him now? 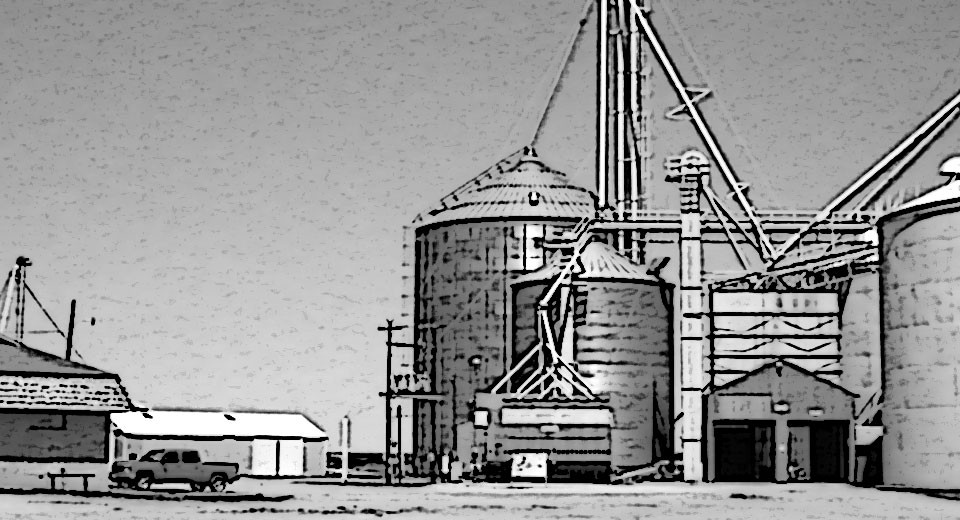