The Swing of the Anchor 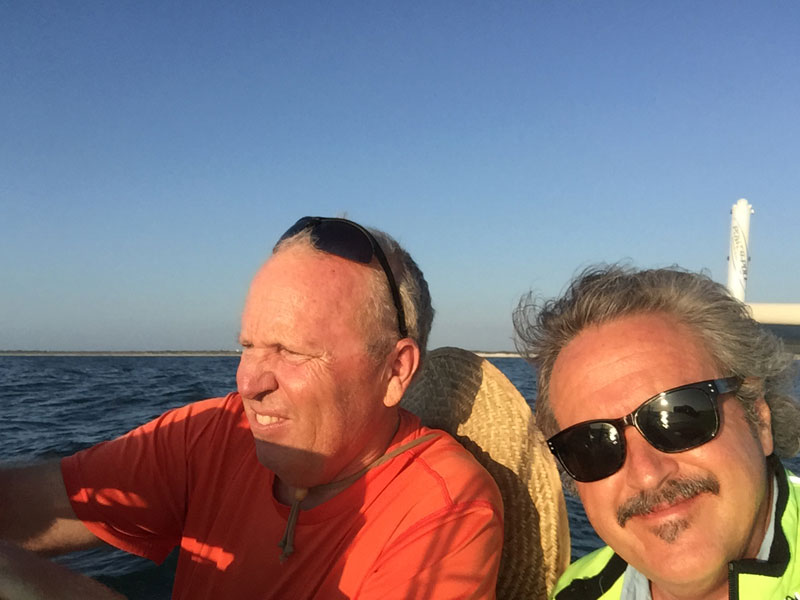 Scott (aka, Cappy) and I heading to a fishing spot. The location is top secret of course!

Scott positions the boat, his eighteen-foot Hewes craft, at the mid-point between the two submerged oyster bars. My job, as it always has been, is to perch myself on the forward deck and grasp the short length of chain that bears the fifteen-pound steel anchor. Planting my feet firmly, I begin a slow, methodical swing of the anchor, swaying it back and forth over the bow of the boat, the tug of the anchor’s weight growing with each oscillation as inertia takes hold. (Which proves that, whatever else has changed, the laws of physics are still firmly in place.)

As always, I hold the anchor in this position for as long as it takes, waiting patiently for Scott to complete the maneuvering of his small craft. This morning, he mutters under his breath, cussing, as he fights an ever increasing current, the northeast wind – and the reality that he has just recently turned sixty years of age. But I, who am still only fifty-nine-and-a-half and have the simple job, enjoy watching the world come to life as I wait. The morning is perfect, as almost every morning is perfect when I am able to fish with my old friend. An orange orb of a sun is rising and seagulls circle nearby in search of baitfish or the remnants of a meal left by careless humans. Having learned from other fishermen that small boats mean food, a group of pelicans lands about twenty yards south of us, anticipating the scraps of fish we might share with them.

As the anchor continues its heavy motion beneath my hand, it occurs to me that I have performed this same small act literally hundreds of times during the forty-five years that Scott and I have fished together. Maybe it is the water lapping at the hull below or the wind gliding across the sea of marsh grass that hypnotizes me, but, in an instant, it’s like someone has opened a window onto the landscape that is our past. If I close my eyes and listen to the sounds around us, I could as easily be fifteen years old this Sunday morning as the six months shy of my sixtieth birthday that I am.

I have lost count of the number of times we have travelled this very creek during the past five decades of our lives. The boats beneath our feet may have changed, but both the geography and our purpose have remained constant. Some people go to church on Sunday morning to find meaning in their life. Scott and I decided long ago to go fishing, instead. Here, amid the sea of marsh grass and the salt air, in the company of our friends the pelicans, ospreys, circling seagulls, and the baby sea turtles that seem to follow us everywhere, Scott and I have found what we were searching for – a measure of peace in our lives. And I understand now that, over the years, my strong hand gripping the swaying anchor has been more than a mundane task. In our world, Scott’s and mine, the swing of the anchor is part of our ritual. It is a symbol of our friendship, a quiet act that celebrates the decades of saltwater mornings we have spent together.

At fifteen, I perched precariously in the bow of Scott’s old Grumman aluminum canoe, preparing to “let fly the anchor.” Today, lost in my reverie at the bow of the Hewescraft, I almost miss Scott’s signal – the part-growl, part-bark of a word: “Drrrp-the-fukr,” which means, as it always does, “Let her fly.”

And, as always, I step up the pace, increasing the speed of my swing and the range of the arc, while Scott is shouting, “DROP-THAT-FUCKING-THING-JUNIORRR!!!” and I am in the zone, the entire apparatus a part of me, as the momentum builds, and it’s just me and the anchor, married in a kinetic dance on a boat that rolls side to side beneath us, pitching up and down as the waves lift us, then drop us, then lift us again, until, like an Olympic discus thrower making his final lunge, I pivot at the last moment, allowing one foot to rise from the deck and my outstretched arm to peak, as the dance explodes, and I release the rope and “let her fly.”

(Like I said, I got it. I always do. I’ve been practicing this move for forty-five years.)

Once the anchor is airborne, I watch it sail through the air. Outward and upward it goes, the chain and then the rope follow like a limp strand of thick spaghetti. Then, quietly, the whole thing slips beneath the surface of the water. It takes no more than twenty seconds for the rope to become taut against the deck cleat, as the steel foot of the anchor buries itself, snuggling into the muddy bottom and securing the craft – and, as if on cue, the boat swings slowly around, seeking a position that points the bow due east.

Even though it’s early, the sun is bright. As I don my polarized sunglasses, I flash on a fact I read long ago: Native Americans always constructed their tipis so the flap pointed east, positioning themselves to greet the sun as they arose. The sun was a good omen for them. For us, too, I think. We will catch fish today.

I glance back at Scott. He already has his rod in hand and is digging through his tackle box for his favorite lure. I am rigged and ready to go, a chartreuse rubber jig tail with a white jig head. While Scott finishes tying his line, I send a long cast towards the end of the oyster bar off to my right. I reel up slowly a couple of times, giving a bit of movement to the bait, which is now languishing on the shell bottom. Out of the corner of my eye, I catch a ray of sunlight that flashes gold and bright, penetrating my dark lenses. Following the bright flash, I turn to look towards the sun, and as I do so, my rod tip moves off to the right. Slowly, I begin to reel again, and then, BAM! A strong hit! I raise the rod again and take up the slack on my line. I can feel him now, a big fish!

Quickly, I say a silent prayer of thanks to the sun and begin to reel in. I look to Scott, who already has the net in his hand and is waiting patiently by the gunnel, ready for my signal when the big fish surfaces. We grin at each other behind our respective sunglasses, excited at such good fortune so early in the day. We share a long moment as the fish makes a run, line streaming from my reel, me tightening the drag. Then Scott starts to turn away, but looks back, as if I have called him. Because, in that instant, there is simply more to communicate.

It’s true that guys don’t talk much, but in our world, the one Scott and I inhabit, we know what the other is saying. Because we have had forty-five years to practice. And what we say today, in our silent way, is this: We are sixty years old, now, no longer fifteen. We will not have the luxury of another forty-five years in which to fish together – in which to share one another’s company. But this morning our lives are good, and maybe they are as good as they get. I have enjoyed every year, every sunrise, every sunset, every adventure, and every creek we have travelled down together. Thanks for being my friend.

Mostly, guys don’t say they love one another. Scott, this is as close as it gets.

2nd attempt-
My friend, Jackie & I can relate to your gift of lifelong friendship. Thanks for sharing a special moment of your life in this poetic manner.

This smacks of Pat Conroy, my friend. You may be approaching the time these memories need to be put in book form.