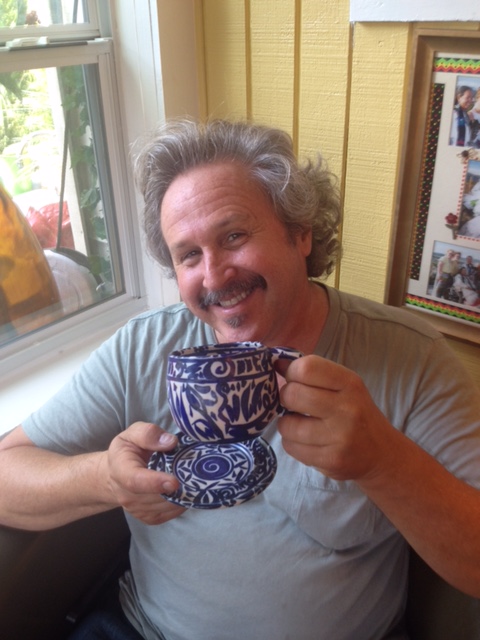 Hugh, safe at home with a cup of tea!

Having launched the blog this week, I have already heard from several friends wishing me well on my upcoming Appalachian Trail journey. One friend wondered if I will be wearing my black Spandex biking shorts from the 2010 bicycle tour; another stated that I do mid-life crisis better than anyone she knows; and everyone wished me well for the trail which lies ahead. Consistently, however, many wondered what the “Teatime” moniker is all about.

It’s easy really. “Teatime” is my trail name—or at least it will be, once I reach the top of Springer Mountain, the southern terminus of the Appalachian Trail. Historically, trail names are a relatively new occurrence to AT journeys. They started appearing, as best anyone can tell, sometime in the 1970s, when the concept of thru-hiking (actually completing the trip in one continuous jaunt) became fashionable. Previously, AT hikers were termed “section hikers,” taking to the trail one piece or section at a time. Essentially, my trip is that, a section hike. At this point in my life I don’t have an uninterrupted 4-6 month period to attempt the whole enchilada. One day, maybe.

So, back to trail names. They are usually given to those who are thru-hiking the entire trail and bestowed by other hikers for something the namee has done which distinguishes him- or herself from their other trail compadres. Often, however, like myself, the hiker will choose his own name. When you think about it, trail names make good sense. At any given time there could be scores of Bobs, Jims, and Bettys out there beating feet from one point to another. Signing the trail registers and distinguishing which hiker has left which message could be downright confusing. A note from, say, a “Raven,” “AWOL,” “Bamaman,” “Itchy and Scratchy My Itch,” or even a “Teatime” will be much less confusing and easier to follow.

I plan to be on the trail a little more than six weeks. Not a thru-hike, I grant you, but still respectable. A mere 425 miles—not the mind boggling 2180 miles one has to hike to get to Mount Katahdin in Maine and earn the 2000 miler certificate from the Appalachian Trail Conservancy. So, as of the morning of September 18th, I will assume the new identity of Teatime.

An identity I believe, that deserves an explanation.

First of all, let me state that I enjoy tea (boiling hot), immensely. Black tea, specifically, like Twining’s English Breakfast, but in recent months I have formed a special relationship with P&G, England’s number one tea (or so it says on the box). I take my cup well steeped with cream and a teaspoon of sugar. For my own tastes, tea is an afternoon or evening beverage and is often enhanced with a semi-sweet biscuit or cookie. The Petit Beurre brand, a mildly sweet biscuit that looks alarmingly like a larger cracker is my favorite.

It is important to note that Tea-with-a-capital-t is not just a hot liquid. Encapsulated in the dried bits of each handpicked leaf is the essence of thousands of years of human civilization. When one pours boiling water upon them, they are creating a magical elixir that has the power to transform the moment.

When I make time for tea, I am making time for life itself. As I sip each delicious drop, I am essentially stopping the world in order to pay homage to the civility of mankind and to affirm the wonderful attributes of being human. I know this sounds absurd and completely over the top, but I have to tell you that I am dead-ass serious. My personal belief is that our world has become a reckless gyroscope spinning wildly out of control. I view the goings on of our global society and the hustle and bustle of our daily lives as if it were the swirling visage of the Tasmania Devil from a Bugs Bunny cartoon.

It is my personal opinion that one can only exist in that frenetic milieu and return unscathed if they do so for short periods of time. One needs a weapon to guard against the assault of life. A tool, if you will, to separate the future from the now. Tea provides the perfect punctuation in the cacophony of sound and motion we call life. The act of Tea is a powerful force. It gives us a sane vehicle in an otherwise insane world. Teatime says, “Pardon me, World, I am getting off at the next stop, thank you very much. You folks continue onward and I will rejoin this hootenanny a bit later.”

Finally (and yes I am almost finished), I am assuming the moniker of “Teatime” as a way of saying I am extending that getting off at the “next stop” moment and taking a break from the whirling dervish my life has become. I have no illusions that, as the sedentary “fat boy” I have become in recent years, every step of the way shall be a challenge. I am certain that as I wind my way to the top of the mountain I will curse myself for thinking this would ever be an enlightened journey. I shall dream fervently of the comforts of home, the quiet company of my wife, our three dogs and noisy cat, salivate over thoughts of a hot meal, a shower, and a soft bed. I will even wonder why I ever left the predictable routine of a daily job and the wonderful friends and co-workers who grace my life. And yet, from past experience pedaling away through miles and miles of a scorching hot Texas highway, I know this too shall pass.

Without warning, we will encounter places along the trail—possibly a bald promontory high in the Smoky Mountains with thousands of vertical feet separating us from the life which exists below—and Ryan, Alexander, and myself shall put down our packs and stop the motion of our trail-weary selves. With little ceremony, I shall reach deep in my pack for a small stove and round pot. I will boil enough water for the three of us and announce to my boys (Alexander just emailed to say he will join us ), “Brace yourselves young princes of the Appalachian Trail, it’s time for tea!”

Enjoy yourself my friend. Tread lightly and take it all in. Cheers!!

Geoff is so jealous! He has always wanted to walk the trail, even has books on it! He said he would go with you if he didn’t have to go to school in the fall. You’re blessed…. He would talk your ear off!!!

I’ve gotta say, that as ridiculous as this might sound, this post brought tears to my eyes. You’re naming the sane response to the big whirling chaos. Much hugsters to you.

Gosh….such a good article……about who you are and what u love. So proud of u. Have been wondering how u r and am so happy to see you are gloriously happy and able to pursue your passions!
I often have wondered lately how to slow down, shut down and put this ” new world” whirling furiously……at bay. Looks like I am going to have to bring out the tea! Have not had it since with u yrs ago come to think of it. You made it taste so good.
I love you Hugh….love ur Mother….and…..Alexander have a beautiful safe life changing journey.
I will be following ur blog. Missed the bike trip blog yrs ago. Take good care.

hey my friend….very excited to hear of your new adventure. BTW, Tom has started hiking and dreaming of doing the PCT (Pacific Coast Trail) and hikes a couple of times a week here in the PS area. Great minds think alike I do think…