“In the course of your many adventures have you ever had to drink your or someone else’s urine?”

Well Robert, I do admit to fancying a nice cold glass of apple juice or the occasional Pale Ale. Coloring here is similar but thankfully the taste has to be a big step up over nicely warmed urine.

So, to be perfectly honest, the answer is no on the urine consumption question.

Luckily, drinking my own liquid waste has never come up for serious consideration during any of my adventures. Many people however, when faced with a survival dilemma have often turned to the consumption of their own urine in order to extend their life. Famous survival cases include people like Aron Ralston, adventurer and author of Between a Rock and a Hard Place has stated that he succumbed to ingesting his urine in order to prolong his life.

Since you bring up the point, drinking one’s own urine in a survival scenario is not recommended due to the waste materials like potassium, nitrogen, and calcium. All fine core body minerals but not to be ingested in excess. Once having left the body the idea is not to ingest them again without facing deleterious effects on the kidneys.

F.Y.I., the Army Field Manual for Survival is not keen on urine drinking either as noted in the screen shot below. 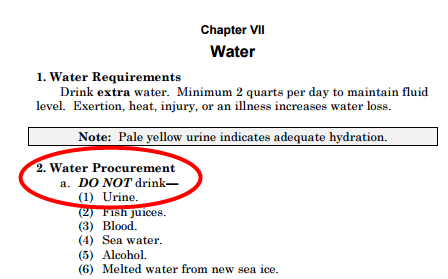 It really gets down to the criticality of the moment doesn’t it? If the question becomes, Live today or die? Well, then bottoms up.