Self-Doubt, Company, and The Kindness of Strangers 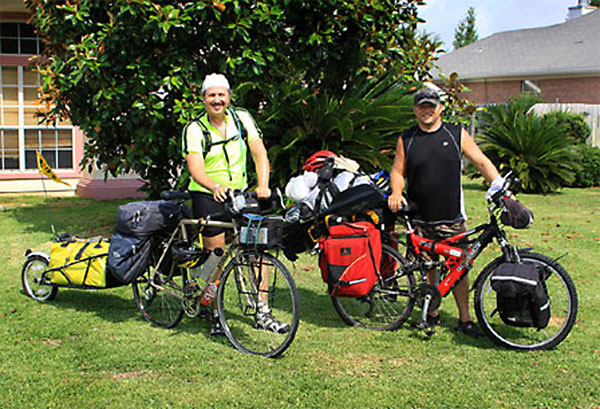 I have come to the realization that this cycling thing is an odd juxtaposition of realities. On the one hand, there is the physical process of pedaling about six to eight hours a day and the attendant aches, pains and strains that accompanies it. On the other is a troublesome mental milieu that I sense is born out of such physical purging and demon chasing. What I am trying to say is that the first two weeks on my Surly have left me in a state of mental and emotional disarray. My bearings are off, my mental acuity is in question, and I have been reduced to a weary state, full of self-doubt. And worst of all, a palpable taste of fear has worked its way into the back of my throat. At 53, I am trying to ride tall in the saddle, be optimistic about my fortunes, and relish the thrill of the open road. Yet I find myself teetering on the edge of a whimper, not able to extricate my mind from its downward spiral. As a young man told me last night, the defining term for man’s predicament here on earth can be summed up in two words: Shit happens.

Leaving Panama City, I encounter a harrowing and bumpy two-hour ride while navigating my way to the beach highway. This, on the heels of my suicide ride through five o’clock traffic last night—when I found myself with no shoulder on which to pedal in a flow of unhappy motorists—leaves me a bit rattled. By the time I make it across the Hathaway Bridge and onto the beach, I’m running late for my scheduled stopover in Destin. Then Providence enters, shifting the winds and spreading before me a welcoming mat of decent shoulder along Highway 98 on which to ride my anxious Surly. Someone once said God takes care of drunks and fools. I believe what he meant was that God takes care of fools and middle-aged, inexperienced cyclists. How else could I cover the next 35 miles and arrive at the home of my Warm Showers hosts, John and Lesa, on time and in luck for an evening meal of chicken curry, naan and basmati rice?

Lesa’s curry is amazing. Her hospitable soul knows the right prescription to alleviate this greenhorn’s obvious road distress. If my early road experience has taught me anything, it is this: there is nothing more rejuvenating than a warm meal, a soft bed, and a smiling face after a long day on the road. All of which Lesa and John provide. Now, it seems I have been transported to some etheric cycling oasis where road rash is instantaneously healed, flat tires self-inflate, and courage for the road is dispensed in hot, heaping platefuls. After dinner, Lesa’s mother, Doris, works her crossword puzzle in a Zen-like fashion, while I sip bottled water like a wine connoisseur, rehydrating my raisinated body, and Lesa tells tales of the biking tragedies, mishaps, and NDEs (Near Death Experiences) that she and John have lived through while cross-country cycling. These stories act like a magic potion, releasing the tension that has claimed me for the last 120 miles, and my stressed frame slowly melts into the overstuffed couch.

By the time Lesa tells of the morning she and John departed Yellowstone National Park, several years ago, I am in a state very near worship. Upon exiting their tent, she recounts, they found themselves slap-dab in the middle of an entire herd of wild buffalo. Scared for their lives, they quietly broke camp and pedaled slowly down the road—but the herd moved in to surround them, the beasts rubbing against their legs and panniers and nudging their bikes along. (They had apparently missed the “Caution: Grazing Buffalo” sign when they had chosen their campsite in the middle of the night.) Lesa says they literally held their breath as they moved with the herd across the valley. Then, suddenly, after much of the morning had passed, the energy of the wild beasts shifted, and a column opened, making Lesa and John’s departure possible. Afterwards, she says, she and John wondered if the herd had been testing them. Had the human cyclists simply been accepted by them as two-wheeled roaming beasts? Or do buffalo have a sense of humor? “Or maybe buffalos just like cyclists,” she adds. But whatever the reason, John and Lesa felt the herd had blessed them and sent them forward to complete their journey.

At that moment, the phone rings, and God, in all of His grace and wisdom, sees fit to throw me one more bone. It turns out that a newbie cyclist by the name of Tim Trepanier is following his Warm Showers list and, like a tired homing pigeon, is zeroing in to roost at John and Lesa’s for the evening. Tim is a man prepared. He arrives loaded with enough gear to make his 15,000 mile junket to the lower 48 a real treat. “I have a repair kit for everything,” he tells us. “And wrapped inside that bundle is a 13-foot kayak, just in case I want to take a few trips down river along the way.” The kayak paddles that protrude from his heap of gear look like two loving arms ready to steady him when he regains his precarious perch atop his mountain bike.

As the evening wears on, I realize Tim and I share some of the same motivations for our journeys. Yet, in other respects, we are cycling down distinctly separate roads. On the shared side of the equation, we are both attempting to sort out our lives. Tim lost his business, his home, and his girlfriend as of a result of the recent financial meltdown. It is true my business is a casualty of the great recession, but—at the moment—I still have a home, a wife waiting for my return, and the hope that my two-thousand mile journey will reveal a path to a new career. Although I have no idea where that path might lead, unlike Tim, I am definitely searching for a way back to the world I’ve recently departed. Tim’s attitude on life, on the other hand, has soured. He, like so many others, has taken a serious hit, yet he remains standing. And when he says, “This journey is my ticket out of this fucked up mess,” I get the feeling Tim could just as easily moved out to the deep woods with the other anti-government types, rather than opting for 15,000 miles on a mountain bike in order to make his escape from “the real world.”

I, however, have chosen to make this trip a spiritual journey. A vision quest, if you will. For most of my adult life, I have not been happy with the man I am. There are inequities distributed throughout my system which I have never been able to reconcile. I have embarked upon this long, slow road to uncover those missing parts of myself that I believe, when found, will grant me a sense of wholeness and restore faith in myself. For all I know, Tim may be seeking a similar end, but if he is, he isn’t talking about it. To be honest, I’m not wearing a t-shirt stating, “Caution: Vision Quest in Process,” either. But my handlebar bag holds a small deer-skin pouch that cradles a few sacred fetishes, a sprinkling of cornmeal, and a sprig of pinion pine from our home in Taos. I carry, as well, a tiny, green porcelain Buddha and a tiny altar made from a clam shell wrapped with threads of rainbow colors, which holds a sacred charm–a gift from one of my spiritual teachers in New Mexico, Lane Saan Moonwalker. These things mean little if there is no intent behind them. However, as I have framed this journey as a time of spiritual discovery, these small items of sacredness form a crucible that grounds my purpose.

Still, in many ways, I see Tim as more courageous than myself. My tan Surly spaceship will be making a re-entry into the known world in approximately two months’ time, when I plan to be in Taos by July 21st to celebrate my anniversary with my wife, Elisabeth. Regardless of the challenges I might meet on the road, my journey will be over in 45 days. Tim, however, is travelling on an open ticket. The possibility that calamity might strike somewhere along his 15,000-mile route and punch his ticket permanently is far greater than my own.

Although I have the impression that life for Tim operates in a single sphere of existence—while I am attempting to slow the pace of my existence so I can bring reality into sharper focus—it is not lost on me that Tim has entered my journey at a conspicuous juncture, a time in which my confidence is at its lowest ebb and my need of company is great. If I were to put stock in the benevolence of an unseen world, I would have to entertain the idea that the man who is seated before me is there for a special reason. What is that reason? Since Lesa has just announced the existence of a luscious dessert, I decide the answer to that question will simply have to wait.

WarmShowers.org is an organization whose sole purpose is to assist traveling cyclists. It is a worldwide system of kind and caring angels, who open their homes, provide meals, and offer a warm shower and place to sleep for those intrepid souls who choose bike travel as their means of locomotion. John and Lesa were my hosting angels in Destin, Florida.