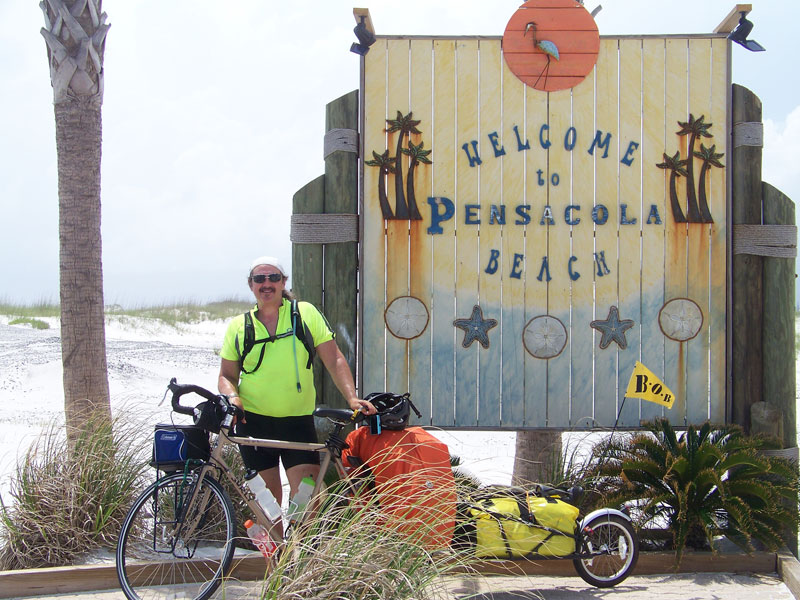 AS WE DEPART NAVARRE BEACH, Tim and I meet heavy headwinds. The late afternoon brings lightning bolts, black thunderclouds, and the threat of flooding rain. The ride to Pensacola, which should have taken two hours, turns into a grueling five hours. We inch our way along a tenuous sandy ribbon of land that begins approximately 40 miles east, in Destin. This wisp of sand is part of the larger Gulf Islands National Seashore, a collection of barrier islands off the Florida and Mississippi coasts. These are only frail, anorexic cousins to the stout barrier islands that grace the east coast of Florida. Much of the Seashore’s 136,000 acres is no wider than the average high-school football field is long. Seen on a map, it looks as if the thin arm of a praying mantis is attempting to create a protective jetty to shield the mainland.

With nothing between us and the wind—nothing but sand and desperate seagulls—we are exposed. Sand crystals make our eyes tear, and our mouths are receptacles for so many shiny, crunchy bits, we might as well have spooned them in like sugar. As we crawl across the sand-covered roadbed, we have to pitch ours bodies at such odd angles to maintain our balance that Tim says we must look like two circus bears performing for a silent crowd under a big top.

The ominous turn in the weather is a portentous reminder that my meandering bicycle journey along the Gulf Coast has acquired new significance: The deeper we pedal into the western edge of Florida, the closer we come to the BP oil spill—the ecological disaster of the century. News of the encroaching tide of oil is everywhere. At restaurants, convenience stores, and on the street, oil’s intrusion into the coastal way of life is the focal point of every conversation. OIL has transformed itself into a slithering, breathing serpent, an evil whose ecological, financial, and cultural threat has become the humid breath that envelops us.

Upon our arrival in Pensacola Beach, Tim and I are like punch-drunk fighters hanging heavily on the ropes. The only activity our weary selves can muster is sitting, stone-like, in a turquoise Naugahyde booth separated from one another by an acre of orange Formica. A young waitress named Peaches, with enormous hoop earrings and equally enormous breasts, remarks that we remind her of a pair of statues she often admires in the park near her home. We try to smile, and shirk off our exhaustion long enough to order. As we sit frozen in private thought, a great tumble of images ticks through my mind: pristine white sand, the aqua of an endless sea, strange patterns in asphalt, gulls pitching over head, a sleek sailboat running for cover, lightning strikes and dark clouds on the horizon. Every so often, a sound interrupts my reverie, and I am once again in the moment, enjoying this air-conditioned oasis on Pensacola Beach, drinking ice-cold Coke, and watching college kids swarm together like bees, clinking beer glasses, high-fiving one another, young girls parading in bikinis and preening their Madonna-like forms.

We haven’t eaten since breakfast, and food is the most important thing on our minds, not news of oil. But after we devour the gift Peaches delivers—large, juicy hamburgers, with French fries and gooey globs of ketchup—one look at the mega-drama running on three giant flat-screen TVs, and I sense that British Petroleum is spinning this story as fast as they can. The horrified public will continue to watch CNN, FOX, and MSNBC, trying in vain to achieve some measure of reassurance and clarity. We desperately want someone to tell us that The Spill isn’t as bad as it looks; that somehow the Gulf of Mexico can survive the millions of gallons of crude oil pumping freely from the hole at the bottom of the sea. But more than anything, we need to feel that our dependence on oil did not cause this nightmare so our collective conscience can remain clear. The bottom line is already written, however. More commentary from Anderson Cooper or Brit Hume isn’t going to bring us a happy conclusion, nor absolve us of our sins: Like it or not, it is our world which has given birth to this nightmare. In my own small way, I have had a hand in this. We all have.

Like a cancer, The Spill holds us captive, creeping slowly into our souls, depleting reserves of hope and joy, robbing us of dreams for the future—while each minute continuing its steady advance on the coastal bays, rivers, and marshes of my beloved Florida. Our lives are out of control, I think, using words that seem like a new mantra for our society. As I watch the beach crowd scrambling for their cars, I wonder, When will we take time to consider the implications of a world moving so hopelessly fast? How long will it be before we realize we must adopt a different way of life so events like this cease to threaten our culture? What can we do?

Maybe the answer is simple: Drive less, walk or bicycle, more. Trade in the SUV for a hybrid vehicle. Stop building McMansions. Break the chains of our addiction to oil. While this may seem glib in the face of such tragedy, one man, Mohandas Gandhi, brought the British Empire to its knees by teaching millions of Indians to practice passive, non-violent resistance. This reminds me that of all the hellish things that keep coming at us from every corner of this complicated world, there are some we can control. Our use of oil is one of them. Imagine if millions of us refused to purchase gasoline for the next month, vowing to ride our bikes or walk to work, instead? How far would the price of a barrel of sweet crude fall?

My father passed away three years ago, on May 9th, 2007. Since his death, I have been fortunate to have him as a guest in a few of my dreams. His presence always reassures me and makes the void he has left easier to bear. Recently, he appeared in another dream:

I am standing in a field next to a barbed-wire fence. Before me, an expansive valley flows for miles into the distance. Moving towards me at great speed is the darkest, meanest-looking tornado that ever graced a weather-channel episode. Several smaller tornadoes snake around the central column of the giant tornado. The combined vision is like some evil double-helix snaking its way straight out of hell. Lightning bolts snap and fire loudly, and the visual effect is completely terrifying. As I prepare to make a mad run for it, my father appears next to me and tells me very calmly to stand my ground. He places his warm hand upon my shoulder, and in his steady, reassuring voice he intones, “Son, a huge storm is coming very soon. Do not run away. Stand your ground, and the storm will pass.” As his words are spoken, the giant tornado magically halts its progress towards me and slowly begins to move away into the distance.

I wonder, of which storm did my father speak? As I gaze out across the dark waters of the Gulf of Mexico, it is easy to think that the answer lies in the distant tide of oil moving slowly towards me.