THE MILKY WAY AND BRIGHT LIGHTS 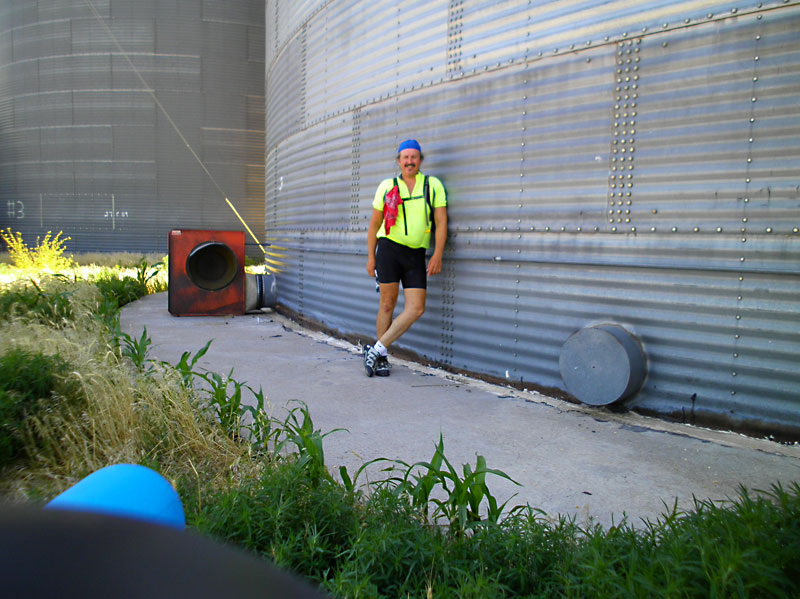 Seeking shelter from the 100 degree plus heat, in the shadow of a grain silo near Dalhart, Texas

I’M CAMPING IN DALHART, TEXAS, under a myriad of twinkling constellations and the cloudlike band of the Milky Way. Gazing up from the unprotected canopy of my small tent, the pure light of the millions of stars beaming down upon me seeps into every cell of my being, making me vibrate with a brilliant intensity. I feel I might magically rise up and take my place in the heavens above—then tomorrow evening another traveler could look up and see a brand-new constellation, the star-studded outline of a lone rider atop his bicycle, pointing towards a safe destination in the distance. But for this traveler, on this night, it seems the long, uphill climb from St. Augustine has delivered me to the edge of the Great Plains of America, where, for the first time, I am able to peer down into myself and understand more clearly the true nature of my journey.

I grew up in a traditional Southern household during the late 1950s and 60s, the only son in a loving but tormented family. My father was a hard-charging workaholic, who showered all of us with expensive presents—but lavished on his only son an even greater share. If other kids had a Lego set, I had Lego World. At sixteen, my first car was a Porsche. Before I graduated from high school, I had piloted my own twenty-foot fishing boat and a Cessna 172 airplane. And during my second year of college, I flew to school in my very own Hughes 300 helicopter.

The scale of my dad’s largesse, I believe, was born of his immense guilt—he was simply never there. He worked constantly: nights, weekends, even many holidays. When my friends were enjoying spending time with their fathers, mine was off bidding a construction project in the far reaches of Central or South America. A larger-than-life kind of guy, he traveled the United States and the Caribean in his turbo-charged Piper Navajo twin engine aircraft. Or, when there were more passengers to be carted, a stunning vintage DC-3 with swivel bucket seats, a bar, and a white leather couch. He was known to all of his employees as “The Chief,” and what the Chief wanted the Chief got. In a time before cell phones, he sported a car phone, and his natural state of being was “on the horn.”

For a man who was central to my life, when my father died on May 9th, 2007, I shed few tears. To be completely honest—and I don’t think I have been until this moment—what I felt most upon his death was a huge sense of relief. It’s not that I was angry with him or didn’t love him greatly. (It’s hard to be angry with the guy who handed you the keys to your own helicopter.) But I felt I had been lured into captivity via an elaborate game where expensive gifts and shiny toys lay waiting behind every door in my life. I just wanted to go fishing with my dad, to be in his company in an uncomplicated way and share time. Unfortunately, the only way he knew how to do that was to hire a charter captain, a fifty-foot Hatteras, and head to the Gulf Stream with diesel engines roaring, as we flew over the swells in a following sea. Dad simply could not comprehend that his only son would have been more satisfied had we grabbed a few cane poles and a can of worms and paddled slowly down the river together in an Old Towne canoe. And in the years just before his death, our relationship reached a point where it was clear that the ongoing gifts were a form of payola. In return, I acted as my father’s sidekick, his confidant, the best friend he never had.

Now, as I lie in my tent, after 1700 miles of hard-ass pedaling up one gigantic hill and then another, I suddenly think that the real reason I’m here is to try and settle the score with my father. Then, just as suddenly, I know that if there is anger inside of me, it is not anger towards my father—it is anger with myself for not jumping on my bicycle when I was nineteen and making a similar journey. For most of my adult life, I have failed to break out of my shell and stand as the lone individual I’ve always believed I am. The constraints that have bound me have been, for the most part, of my own choosing: I’ve been held back by fear of failure, fear of not living up to someone else’s expectations, or simply fear of the unknown. But—although I can’t tell you why pedaling so far was the way to accomplish this—I feel as if I am finally in control of my own life, that I have purged my inner demons one drop of sweat at a time. It seems the one asset of my youth, my bicycle, the one thing that routinely brought me the greatest pleasure and the greatest sense of freedom, has once again been the vehicle for my deliverance.

I have heard that the closer we get to the truth, the more difficult it is to accept. For a moment, I feel a sudden flash of heat, as if I have moved too close to a bright flame. Then, just as suddenly, I am drifting off to sleep. Hovering at the edge of my consciousness, I hear the tiny whisper of a voice: “Your quest has only just begun.”

I dream of a large bird, possibly an eagle, soaring across the immense expanse of grass-covered plains and over the snow-covered peaks of the Rocky Mountains. I view the landscape from above, but I am not the bird who sees the western landscape from such a lofty height. I simply see through his eyes—his sight is shared as a special gift, affording me a clear view towards my final destination.

At first light, the chirping of a flock of meadow larks in an elm tree near my tent wake me. I lie in my sleeping bag in the cool morning air and watch the birds’ yellow and brown bodies jerk in small steps in the branches above. My gaze shifts, and, somehow, I am able to see into the distance that lies ahead. I know that those long miles across the open plains and over the Rocky Mountains will not only bring me home to Taos, New Mexico, but will also place me squarely at the doorstep of a new and different future.

As I make my way out of Dalhart, my mind is on my father, and a memory flashes. It is one of those memories you don’t want to revisit because the very act of recalling it leaves you blind from the harsh light it emits. I was six or maybe seven years old and had been playing alone in the front yard, searching beneath the old oak tree for a four-leaf clover—a pastime my friend Gail Peebles and I often enjoyed. A car pulled to the curb, and I ran down the sloping green expanse of St. Augustine grass to meet it at the curb. The rear door flew open and there sat my father, intoxicated, drink in hand, with another woman’s arms around him. I was confused, but still excited to see my dad so early in the day. “Daddy!” I yelled. “Daddy!” He just looked at me and shouted back, “Daddy? I am not your daddy, boy. I don’t even have a son.” He and the woman started laughing, as if this was the funniest thing they’d ever heard. As quickly as they had arrived, the door closed and the car sped away. I stood by the curb for a long time confused and overcome by sadness. Eventually, I started to cry.

I have carried that memory for all of these years, and many times I have wondered if the man in the car really was my father, after all. Possibly, I was mistaken, and the man who so casually dismissed my existence was someone else altogether. I don’t believe so. What I do believe is the memory of that day lay at the heart of my father’s enormous generosity. I believe he was as tortured by his failing that day as I was by his denial of my very existence as his son. I believe my dad spent the rest of his life trying to make up for that singular moment. In the end, he failed. He never spoke of that incident to me and, having suffered a stroke the day before his death, was left speechless and denied any final words. I did not bring it up. The man who lay in that hospice bed was “The Chief.”

Yet the memory burns as hot in my heart today as it did on the very day my father uttered those words: “You are not my son.” Having lived more than fifty years since that moment, I have made my own mistakes, and, through them, have gained a greater perspective on the events of that long ago day. I don’t hold a grudge against my father, but his words and the salacious scene that binds them in my memory will never leave. It is impossible to take back things we say, but don’t mean, and yet I wish he had at least tried. As for myself, I wish I had found the courage to face him with my memory. Silence is a dagger that cuts to the heart.

The sun is out and the temperature well above one hundred degrees, as I make my way to Clayton, New Mexico, on Highway 87. I keep pedaling and giving thanks for every drop of sweat and every ounce of dark matter that pour from my body. The heat of the sun shines bright and hot, and I lift up the memory of that day as an offering to the spirits that have guided me on this journey. I ask that this pain be released, not just for myself, but also for my father. By the time I reach Clayton, the pain of the morning has long receded.

In the Native American spiritual tradition there is a phrase, mitakuye oyasin, which means, “to all my relations.” It is a philosophy that ties a man’s life to all things and speaks to a sense of oneness with all of God’s creations. There have been moments on this journey when I have felt the spirit of my father, and today, traveling from Dalhart, I believe he is with me. Maybe it was necessary that I pedal all of these miles to be ready for him. Maybe the eagle took me to a place where this could happen. And, maybe, this is our time to make peace, my father and me. A chance to make right those things we had each failed to accomplish when we were together.