LUTEFISK WHILE IN NORWAY 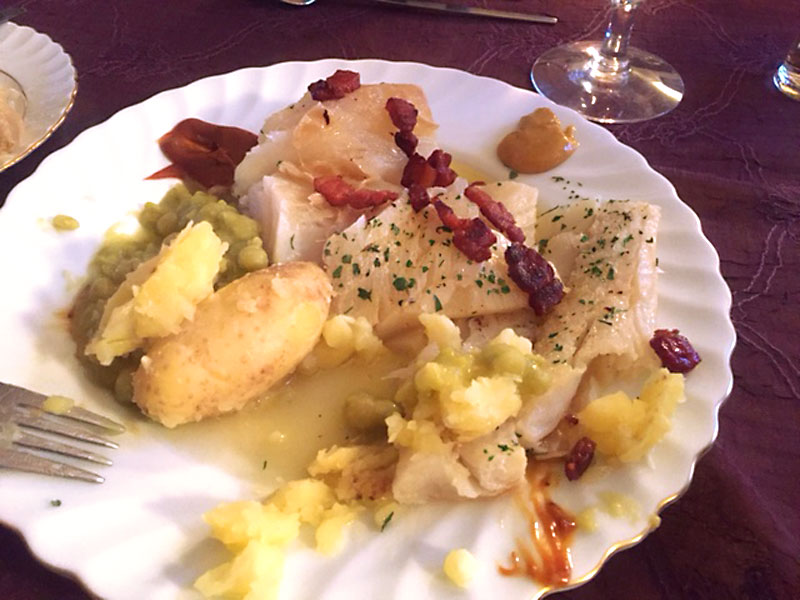 A delicious helping of lutefisk at Ottar and Wenche’s home in Trondheim, Norway

When I travel, I hold one hope so close to my heart it is a prayer of sorts: that I will connect personally with residents of the places I am journeying through. Something as simple as a brief exchange on the street can provide insight into what life is like wherever it is that I have landed. I crave these connections and the direct understanding of the place that local dwellers can provide. But if the truth be known, this craving hides its own secret – that I really wish for a seat at their table. Their dinner table, that is.

I have always believed that sharing a meal with someone forms a bond. It also opens a doorway that allows me to see further into their lives, and they into mine. For these reasons, an invitation to a dinner ranks so high in my estimation that it resides in the place of hopes and wishes, perhaps even prayers. But the chances of a traveler making his way into the privacy of a local home is, well, remote. Yet, during our travels through Norway, it actually happened. #luckytravelers

It is midafternoon on Wednesday, August 31st, and Elisabeth, Mimi, and I have just have boarded an SAS flight bound for Bergen, Norway. Sadly, these are the last few days of our Norwegian experience, as we fly home to the United States on Saturday. Since our arrival, we have felt the kind embrace of Norway’s warm-hearted and gregarious people. Only last night, we dined with our new friends Ottar and Wenche (veen-ke) Solskinnsbakk at their beautiful home in Trondheim.

We met these two wonderful people at Daniel and Hanne’s wedding in Stamsund. During the course of the evening, Ottar entertained us with exciting stories of his time in the cockpit of an F-104 fighter jet as a pilot in the Norwegian Air force and his subsequent years flying 737’s for SAS, just like the one in which I am now seated. Together with Harald (father of the bride), we also discussed Norwegian cooking – in particular, the traditional Norwegian dish lutefisk.

This was not a new topic to me, as the day before the wedding, Harald had mentioned the dish, saying that, of the many Americans he had seen consume it, only a very few survived. I took this as a personal challenge and told Harald that this American would read up on lutefisk, and we would discuss the matter further.

Politics, Cocktails, and a Few Laughs

But before we got to the lutefisk, Harald, Ottar, and I embarked on some post-nuptials drinking, running the gamut of conversational topics, as we did so. At some point, I mentioned the American presidential race – and “The Donald,” in particular. At that, the two men stopped talking and just looked at one another. Then, almost like it was choreographed, they started shifting their weight from one foot to another. As they rocked to and fro, I could feel the tension rising to punctuate their movements.

Wondering if I had, in my innocent, carefree, American blabbing, breached the bounds of accepted social behavior, I just stood there miming a blank expression, looking at Ottar, then back at Harald, waiting for someone to speak.

Not to offload any personal responsibility, but we Americans are known for social faux pas. The fact is, compared to a lot of cultures, we are usually a bit loud, a bit brassy, and often a bit clueless regarding our indiscretions. Especially when it comes to minding our manners on the other side of the pond.

But in Stamsund, on Daniel and Hanne’s wedding night, instead of acting like they smelled something bad, my new pals Harald and Ottar gave me good vibes. Noticing my uncertainty, Ottar smiled his broad, Norwegian smile – and placed two fingers below his nose in a comic reference to Hitler’s notorious mustache. He laughed loudly and said, “Thank you for mentioning the American politics. We didn’t know if it was proper for us to ask.” Then, with a grand twinkle in his eye, he added, “It’s kind of like you asking us, ‘How was the war?’” referring to Norway’s occupation by the Nazis in 1940.

At this point, we all had a good chuckle (mine, with relief mixed in), lifted our glasses, and for something like the fiftieth time that evening clicked our glasses and shouted, “Skol!”
“So,” I said to Harald. “I read up on lutefisk.”

Harald raised an eyebrow. “And what do you think?”

Determined to be an American who ate lutefisk and lived to tell the tale, I shot back, “Do you think I can find some at a restaurant? I really would like to try it!”

(It is here that I must stop and inject a brief background about lutefisk, for those of you who are as blissfully unaware of Norway’s national dish as I was previously. Lutefisk literally means, “lye fish.”

Sounds appetizing, doesn’t it? And its preparation requires a lengthy process.

First, codfish must be caught and then dried. Then the dried cod is reconstituted in cold water for three to four days. Then lye (yes, lye – that same caustic substance used in making soap) is added to the water for another four-day soak. The fish is then soaked in cold water, yet again, this time, to leach out the lye. During this unusual curing process, the proteins in the cod disintegrate. Therefore, when you boil, steam, or bake it, instead of a nice, flaky loin of cod, you have a jelly-like substance. Fish jello.

If you’re still interested in giving it a try, your dish of lutefisk will be accompanied by boiled potatoes, creamed peas, and possibly a cream sauce.)

Surprisingly, just the mention of lutefisk had Ottar smiling. Although even many Norwegians find lutefisk not so tasty, clearly Ottar was a lutefisk fan. He told Harald and me of his massive appetite for lutefisk. His love for lutefisk reaches a crescendo each December, it seems, when he invites all of his friends for his annual lutefisk party.

However, Ottar said, with some disappointment, he had to agree with Harald – lutefisk was hard to come by at this time of year. My hopes of improving America’s lutefisk-eating reputation was dashed, and our conversation moved on to fishing. But I could sense Ottar formulating an idea. Suddenly, he interrupted Harald in the middle of an interesting soliloquy on Norwegian salmon and raised his glass. At first, I thought we were skol-ing , again. Instead, Ottar announced that he had been “captured by an idea as if a lightning bolt had struck his head.”

It turned out that Ottar’s big idea was to offer us a tentative invitation for a lutefisk dinner at his home in Trondheim on Tuesday evening – if he could secure some fish from his local fishmonger. A prickly sensation came over me, as I sensed the Universe conspiring to make my “travel prayer” a reality. Although my unappetizing research into the Norwegian delicacy had left me a bit ambivalent, joining Ottar and Wenche at their dinner table would put me in my happy place – among the jewels of hopes and wishes – no matter what was on the menu.

In the event, Ottar, who had indeed secured four kilos of lutefisk, proved to be a master of lutefisk preparation. His fish was neither as pungent nor as jelly-like as Harald (and Google) had warned. In fact, our meal was quite delicious. As Ottar explained, the key to successful lutefisk, is to acquire quality cured fish and cook it in well-salted, boiled water. The salt, he said, holds the fish together, provided it is not cooked for too long.

Ottar did serve the traditional creamed peas and potatoes, but he added a few twists. He placed on the table a pot of thick, cubed bacon swimming in hot bacon grease, which we ladled liberally on each piece of lutefisk. A jam made from a popular brown Norwegian cheese mixed with sugar was also added to our plates as a condiment to be spread on each bite. Finally, Ottar instructed us to take a small bit of potato and a small smear of creamed peas with each forkful.

And so we feasted high on a hill over Trondheim, gazing past almost-ripe, apple-laden trees to a commanding view of the city and the sparkling waters of yet another deep blue Norwegian fjord, below. “This is the way to eat,” Ottar said. “Oh, and a sip of Aquavit (a strong, dill-flavored liqueur), as often as possible,” he added with his big, broad smile.

I wish to thank our friends Ottar and Wenche for such a grand night. As Elisabeth, Mimi, and I sat in their living room after dinner, drinking coffee and viewing photos of their family farm, I couldn’t help but be aware of the wonderful luck that has befallen us on this journey. The travel prayer I hold close to my heart came true – and holds promise of coming true again.

You see, as I bid Harald goodnight after the wedding, he asked me, almost sternly, “Do you plan to return to Norway in the future?”

When I told him we definitely wished to return, he looked at me for a long moment. Finally, a small smile formed in the fertile valley of his face, where just moments before there had been nothing but desert. “Then I have a plan,” he announced. “A one-and-a-half meter salmon I will find for you. On a fly rod, of course. It is the only way to fish.”

The story of how lutefisk became a Norwegian delicacy rests in the bosom of Viking lore. It is told that while a group of Vikings were out doing battle, their village burned to the ground, and racks of dried codfish fell onto the puddled earth below. The rainwater mixed with the potash from the burnt village, and the codfish lay curing for many weeks in puddles of potash soup. Upon the Viking’s return, the only thing remaining to eat was this codfish. They recovered the fish, rinsed it, and declared it a delicacy. (Everyone agrees that this is probably a stretch. More likely, the curing method originated in China and was shared during a trade.) 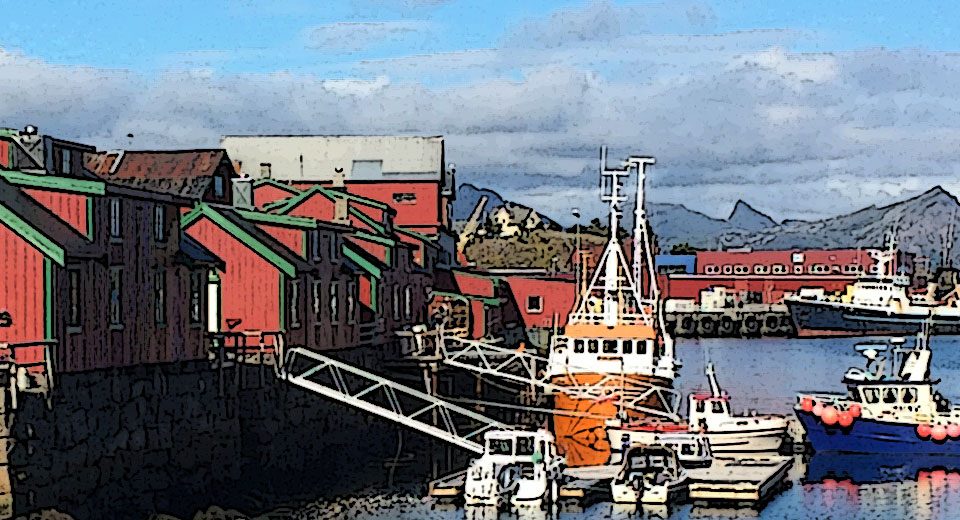 Thoughts Upon Our Norway Adventure
September 26, 2016 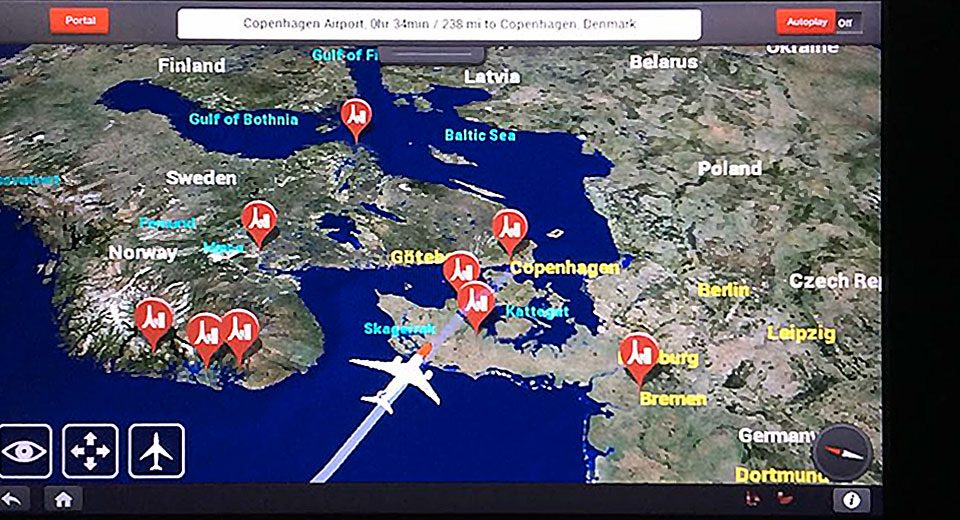