Buddha at the inspection station 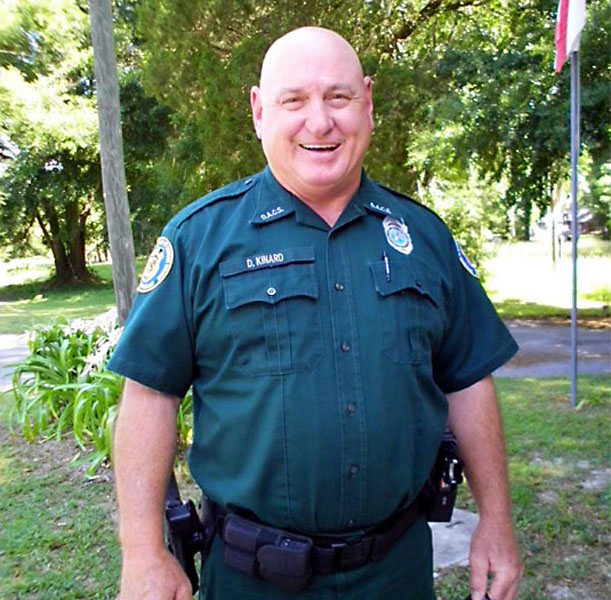 YESTERDAY’S RIDE PAST THE LUSH TOMATO FARMS of the Suwanee River Valley did not produce a single grocery store that allowed me to stock up on food supplies for dinner. Luckily, I packed a few freeze-dried meals for just this type of situation. Last night’s beef stroganoff turned out to be quite yummy, but I wake up today and have only an orange and a Clif Bar remaining for my morning meal. And one thing I can share is that a steady routine of 50 mile-per-day bike rides makes a cyclist permanently hungry.

About one mile from the Suwanee River State Park entrance, I come upon a Florida DOT agricultural inspection station. I honestly don’t know why I pull into the queue, because food is on my mind. Nonetheless, I find myself stopped in front of the guardhouse, as a burly officer with a big smile greets me and asks, “Where you headed, fella?” When I reply that my final destination is Taos, New Mexico, the robust officer seems humored with my answer and appears to relish the fact that I am engaged in a “bit of a traveling journey.”

We make friendly introductions, and in a matter of moments it is readily apparent that Officer Dale Kinard is no ordinary man. He goes straight to the heart of a matter that I have heard raised repeatedly since I left St. Augustine one week ago: As a society, we are teetering on the edge of a dangerous precipice. Decades of excessive consumerism, isolation from our communities, lost identity, and a lack of common goals have taken us to a place where we must readdress our priorities, our needs, and our place in the world—or face serious consequences.

Is it my human-powered means of transportation that prompts Dale’s line of discussion? Or is it simply a topic that is resting near the surface with many people? I have been on the road less than a week, and each day this theme has surfaced: My good friend Daisy brought it up while I was a guest in her Melrose home; Irwin, my Gainesville host, spoke of simplifying needs in life and focusing on the matters of real importance during our dinner conversation; fellow cyclists Rand and Marsha mirrored these same feelings when we met on the route outside Gainesville. Kerry from High Springs, shared his concern for the direction we are heading. Now, in this randomly picked location, my new acquaintance, Dale, is also deeply concerned about the collective “we” of the human species.

But he goes further, raising the important question of why we have to be married to the idea of constant growth and expansion. Why, he asks, does our economic way of life and the engine that drives it have to consume more each and every day in order for us to survive and prosper? He speaks from the heart, and we both understand what many understand: We exist in a world of finite resources. We both nod in agreement. These resources are on the decline. Why, then, do we proceed as if this was a time of plenty and abundance? Is it too far a stretch to say most people understand that the view ahead is fraught with disaster unless we make drastic changes?

I must look astonished as Dale continues to question the motivating principles behind our society. His eyes convey his pleasure in the fact that an officer from the Ag station can engage my brain so completely. I can only ask myself, What doorway have I stepped through in my encounter with this man? Why is Dale so intent on these ideas? More importantly, why is he sharing these thoughts with me? Sure enough, no sooner has my astonishment passed and made way for engaged conversation, than Dale reveals that he is a man transformed. He has undergone a period in his life that prompted a spiritual awakening.

He shares that his wife died a few years ago, and that her death was a long and protracted one. Six months later, his son Jesse died in a freak auto accident less than three miles from Dale’s home. Just before his death, Jesse had been hired as a fireman, in of all places, my hometown of St. Augustine. When Jesse was returning to Suwannee for a family visit, a young boy chased a puppy out into the street in front of his car. Jesse swerved to miss the child and dog and was killed in the ensuing crash.

I have one foot on the curb and one hand on my heart as Dale tells me of the grieving he has experienced. We both have tears in our eyes, and I pray neither of us will blink. I can only think of the pain he must have endured. Immediately, I want to reach for my cell phone and call my son, Alexander, and hear his strong nineteen-year old voice and know he is safe. Dale tells me of the long weeks he lived sequestered in his home. He cut the phone lines to his house and did not allow visitors for twenty weeks. Then, out of the blue he boarded a plane to Virginia and hiked the Appalachian Trail for several months. While there, he met many people that, in his words, were “kind and generous” to him. He looks me in the eye and tells me I am preparing to meet people of generous spirit, and that they will help me along my way, as well. I laugh and say, “Dale I already have. I’ve met you.”

What I find so amazing about Dale is his commitment to his new awakening. He tells me he is finally able to focus on his life, and at this point, he realizes that the many things he worried over in his daily life were not the things he should have worried over, after all. “Hugh,” he says, “in all the years I had lived, I simply had it wrong. I worried about the wrong things, and did not pay attention to the people that meant the most to me in my life.” Dale has since given his life savings away to his surviving children; he now lives on his retirement pension and the paycheck from his job as a law enforcement officer. He tells me that Madison County is poor, and he helps families in need by secretly depositing food gift cards in their mailboxes. He adds with a twinkle that he “hauls ass” before anybody sees him do it.

How can I respond to such a genuine and generous spirit? I can only be thankful for Dale Kinard appearing on my path. Told in his direct and honest manner, Dale’s story vanquishes my doubts and makes me aware, with crystal clarity, that the Dale Kinards of the world are what this trip is all about. I know for a certainty that my concerns for safety and endurance will all be answered if I focus less on the miles ahead and more on the many points of light that will illuminate my way—people like Dale, who will be everywhere along my path holding their bright lanterns so I can find my way.

We exchange contact information. Before I leave, Dale tells me Archie’s restaurant, in Lee, is his favorite place to eat. He recommends I try the fried chicken for lunch. I shake Dale’s beefy hand and depart for Archie’s. As I ride, I realize the last time I wept was when my father passed away, three years ago. But now, as I cross the Suwannee River on my way to town, Dale’s story and his strength overcome me. Tears stream from my eyes as I think about his courageous rebound from such paralyzing tragedy. I think about the huge leap he’s made in consciousness, overcoming his sadness and his anger to make a difference in the lives of those around him. I will not forget my conversation with Dale Kinard.

When I finish my delicious lunch at Archie’s and ask for the check, Tashena, my waitress, informs me that Mr. Dale called after I left the inspection station. “Lunch,” she says, in her sweet Southern voice, “is on him.”