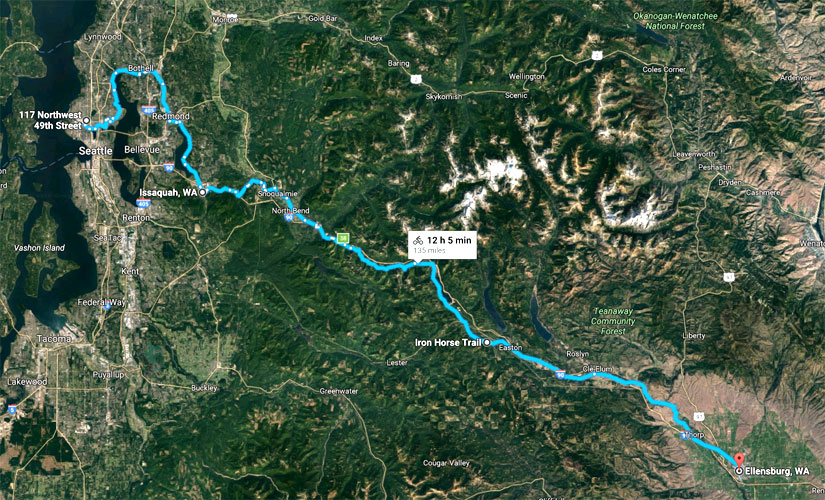 A Google map of our route – the first few (four) days of our bicycle trip. Mid-life adventurers taking it easy. Seattle to Ellensburg, Washington.

The Cyclist’s Leap, or Are We Really Going to Do This Bicycle Trip

In exactly three weeks, Elisabeth and I will fly to Seattle, Washington, to prepare for a bicycle trip that will take us east over the Cascade Mountains via the John Wayne Trail, to the drier side of Washington at Ellensburg. We’ll pedal west a bit to Kennewick (more on this later), where we’ll meet up with the Columbia River Gorge, and then head west two hundred twenty-five miles to Portland, Oregon.

The journey will be a well-earned break for Elisabeth – and a grand opportunity for moi, the After-Fifty Adventure Man. For Elisabeth’s part, she has been studying furiously for several years in order to complete her physician’s assistant program. Her board exams are October 3rd. And for mine? Well, I turned sixty on August first. A lot has changed since my last big bike ride in 2010. This long tour will be less a search for answers and more an opportunity to spend time with Elisabeth. (But who knows? There is always an existential crisis just waiting to be uncovered.)

After spending a few days in Portlandia, sipping cappuccinos by the gallon and watching young hipsters in their natural environment, we will head west again for the Pacific Coast Highway. On our way to our ultimate destination, Elisabeth’s parent’s home in La Jolla, California, we will camp under giant redwood trees, cruise through Napa Valley, and cross the Golden Gate bridge under our own power.

“How far?” you ask. Google Maps answers: one thousand nine hundred and eighty-six miles. (Sheesh. My ass hurts just thinking about it!)

We will begin our bicycle trip, weather permitting, on Wednesday, October 12. We will follow the Burke-Gilman Cycling trail, one of Seattle’s many paved bike paths, which will take us northward in a long, sloping arc to the east of the city and along the shores of Lake Washington. The Burke-Gilman connects to the Sammamish Trail, which directs us south, through Redmond. We will stay in the town of Issaquah, a distance of approximately 40 miles, our first night out. The next day, we will begin our ascent over the Cascade Mountains (95 miles to Ellensburg). Then we will cycle the John Wayne Trail, an old railroad bed turned bike path that takes us through several tunnels (one a whopping 2.3 miles long) and across high trestles and bridges, beside crystal clear mountain lakes and streams.

My God, we will be pedaling through salmon country!

When making plans for a cycling trip of this nature, you spend a lot of time consulting maps, reading cycling blogs, watching YouTube videos, and, in general, gleaning information that might alert you to road conditions, weather patterns, bike trails, or resources that might come in handy along the way. “Information mining.” That is the task in which you engage yourself in the beginning. That, and waiting. Waiting for a clear consensus to form. Waiting for an answer to the question “Are we committed to do this thing?” Yup. The “C” word. C-O-M-M-I-T-M-E-N-T.

The answer usually comes in stages.

Elisabeth and I have talked about this trip for quite a while. We’ve reveled in the romantic lure of such a long journey. We’ve envisioned ourselves atop our bikes, gazing out from high peaks overlooking the oh-so-blue Pacific. We have even imagined ourselves humping it up steep inclines to get to one beautiful promontory and then the next and then the next. In these visions, we are happy, contented, and pleased with ourselves for being so adventurous.

One evening, while map-gazing and sipping really good California Zinfandel, we said enthusiastically, “OK, let’s do this!” But in the next instant, we pulled back from the edge.

We were still waiting.

We re-approached the tipping point when Elisabeth purchased a bike online from REI. It was a great deal. A steal. When we drove to Jacksonville to pick it up, we said, “It looks like we’re going to do this bicycle trip, huh?” We really wanted to believe ourselves. But the truth is, there was still a little squirm in the back of our minds. Besides, the bike was such a good deal that, even if we bailed on the trip, Elisabeth would enjoy her new ride, anyway.

No harm, no foul.

And yet we continued to accumulate data. I read so many blog posts and watched so many videos of the John Wayne Trail that I felt I knew the forty-one point three miles to Ellensburg like the back of my hand. Yet, we didn’t make any grand proclamations; we just trudged along, stuffing away bits of information in those ole noggins of ours. Oh. And I started the Excel worksheet.

“No commitment,” I told myself, “I just want to keep track of it all.”

I titled the worksheet “The Big Bike Trip” and filled it with the kind of stuff that could save your bacon in the right circumstances: the location of coffee shops, service stations, and small cafés, for instance. Places to get in from the cold or rain. Bike shops, tiny hotels, Walmarts, fire stations, small parks where we could pitch a tent. Each item I added was a breadcrumb strewn before us, not just marking our route, but beckoning us to follow them along it.

I ordered Rand McNally maps for Washington, Oregon, and California. I ordered the boxed set of five Adventure Cycling maps for the Pacific Coast Highway. Upon their arrival, I unfolded them with care, arranging each map panel precisely, to view the potential route more clearly. I flipped each map gently, from one side and then the other. I ran my fingers along highways, blues lines, red lines, and grayed out vectors that lead to desolate, uninhabited places. I traced starting points and followed them to their natural end. I paid attention to elevations.

Alternating between paper maps and the computer, I would see a town on the map and hurry to Google up its possibilities. I ingested facts about towns and cities – land area, population figures, types of industry, restaurants, hotels, how many golf courses or donut shops they have – as if I were researching them for inclusion in a magazine article titled “Towns Along the Tour.”

I routinely took strolls down one or another main street by way of Google street view. I peeked in windows, looked at signs, and tried, when I could, to make out faces. A few times, I even caught myself waving at the locals. (What if I were actually be riding through, say Yakima, Washington, and saw one of those people! If I did, I would holler, “Howdy, it’s great seeing you again!”)

Despite Elisabeth’s concern that I was taking things a bit too far, I pressed on, visiting scores of chamber of commerce websites, just to see what the bike lanes and the churches were like. I looked up grocery stores, retail shops, and RV Parks, believing that the sheer number of all these details would pave the way right to the edge of what I call “the Cyclist’s Leap.”

And they did. A few weeks ago, as I was adding yet more notes to my Excel worksheet and asking myself questions like, “Does this town pass my two-grocery-stores-and-one-coffee-shop-rule?” the balance tipped. As if it were the most obvious thing in the world, I closed my worksheet, launched a browser window, and navigated to Travelocity.com. Pretty as you please, a few clicks later, I had two one-way tickets to Seattle aboard Alaska Air.

When I told Elisabeth what I had done she looked at me and said, “Well, I guess we are really going to do this thing, huh?” And we toasted our leap with that excellent Zinfandel.

Pedaling takes time, and a bicycle trip of this nature is slow progress compared to automobile travel. You experience every inch of the terrain you are traversing – you can’t avoid it. Most days will be good, when you’re heading down an open road, but some days, you will feel like you have a hold of a taut line, and a wild beast is tugging hard on the other end. You will encounter bad weather and stiff winds and uphills and downhills that will make you wonder what you were thinking when you took that leap.

But more than anything else, you must reconcile within yourself the immense disparity between the distance it is possible to cover in an hour in your automobile and the fact that it will take a cyclist one very long day in the saddle and many thousands of revolutions around his or her crank to achieve that same stretch of miles.

The hours I spent assessing each way-point of undiscovered country was my way of determining if each of those miles would be worth it. But I was also psyching myself up. Preparing my mind for that paradigm shift. It’s going to be one hell of a ride. Am I ready? I am not alone. Tonight at dinner Elisabeth said haltingly, “I hope I can do this bicycle trip.” I understood. “Don’t worry honey. We will take our time,” I told her.

The fact is, we are no longer younger people. We have crossed the fifty mark. Elisabeth is fifty-seven, and I am north of sixty. Life gets more complex as we move forward. This is my biggest disappointment with growing older. When I was a wee tike of thirty, I thought life would become simpler as I got older. It has not. Just breaking from our daily lives to make a bicycle trip like this is an immense undertaking – never mind the question of our ability to physically complete the ride.

And that is not all. As we board the plane for Seattle on October ninth, my thoughts will reside with my eighty-nine-year old mother. I worry that I won’t be with her should anything happen. Our two dogs, Ila Mae and Boo Boo, too, are aging. Both are in their 16th year and showing their age. A part of me wants to stay home to care for them.

We are always caught between our lives and our dreams.

Yesterday, though, my mom brightened when I brought up the bicycle trip. She placed her frail hand on mine and said, “I want you to go and live your life, son. That is what life is for. Go out there and ride that bicycle of yours and enjoy yourself. I have had my time. Now, it is yours.”

Of all the many years-worth of advice I have received from my mother, this is without a doubt the most wonderful she has ever given me.

As Jack Kerouac said, “Live, travel, adventure, bless, and don’t be sorry.” Who would have figured my mom for a Kerouac fan?

The following photos are courtesy of Gene Bisbee. He was kind enough to share scenes from his many bike journey’s along the John Wayne Trail. Gene runs an excellent biking blog about the Pacific Northwest area ( http://www.bikingbis.com ). I appreciate his generosity in sharing his photos so that everyone can get a feel for the trail we will be riding in early October 2016. 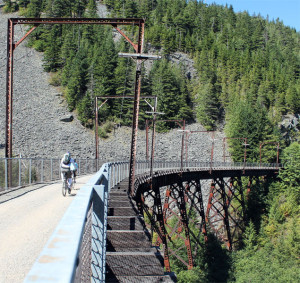 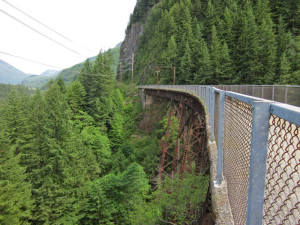 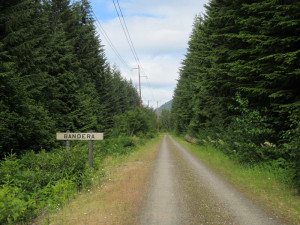 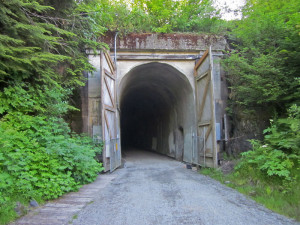 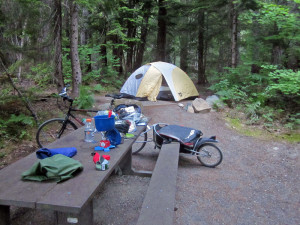 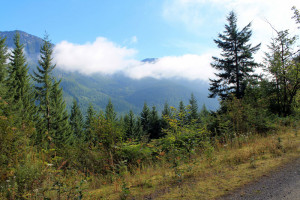 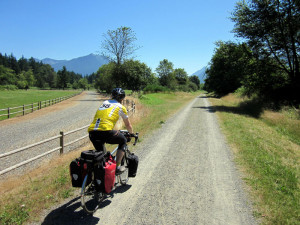 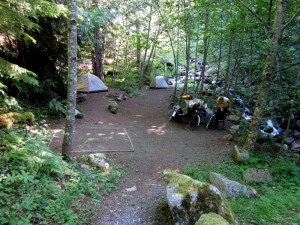 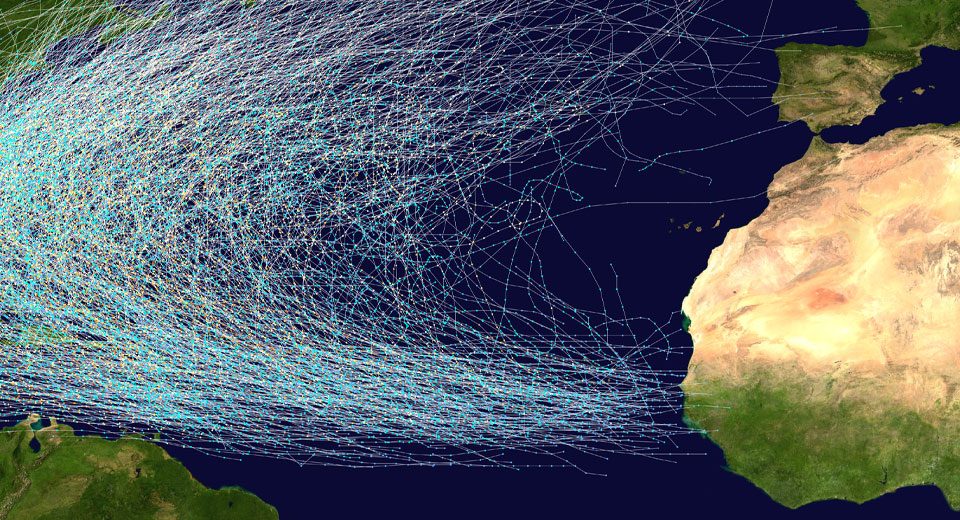 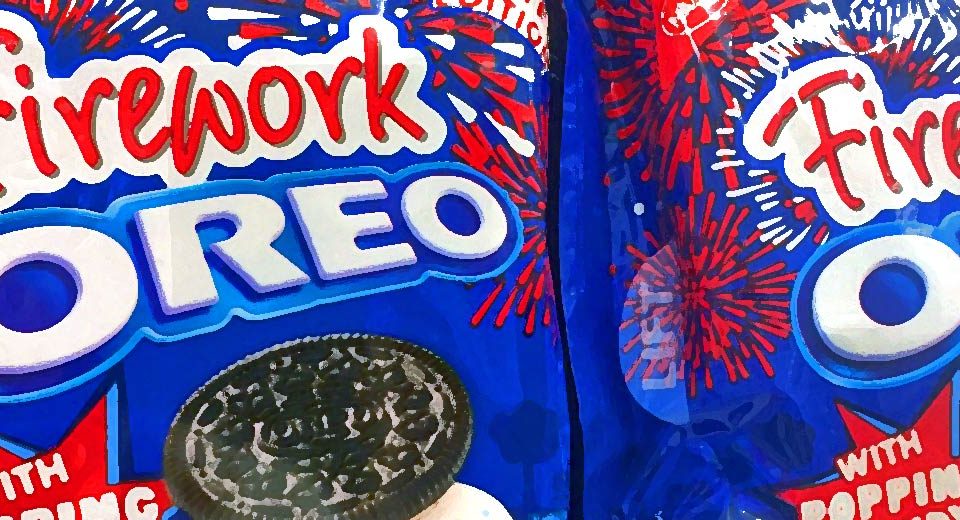 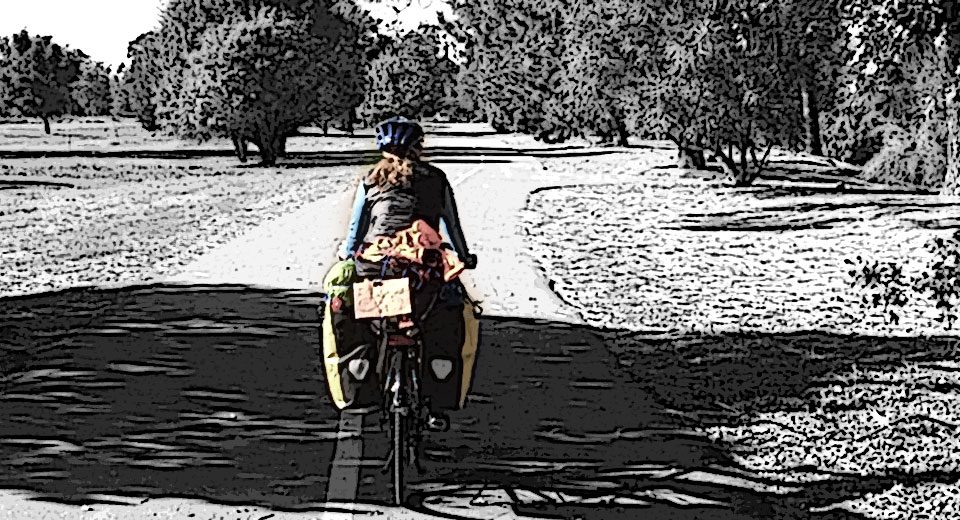 I can’t wait to read about your adventure! Just reading this post has made me miss our trip so much and regret even more that we weren’t able to finish. I know you two will do great. I only wish you were coming around our neck of the woods so we could show you the same hospitality you showed us. Good luck!!

Hi Jessica,
Great to hear from you and I was really saddened to hear you guys had to stop your trip. Stay in touch!