WE ARE STILL ADVENTURING 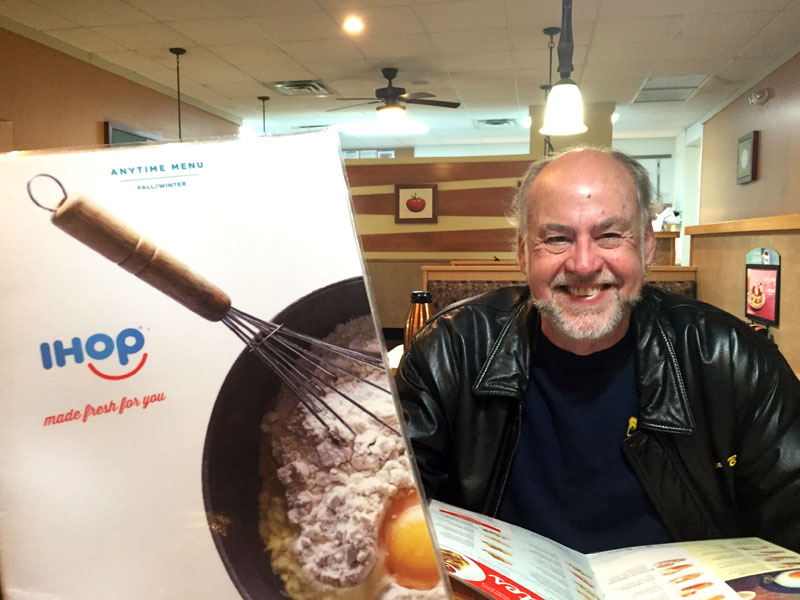 Bob at iHop in Tallahassee. A morning of scrambled eggs and soul searching between soul brothers and finding adventure in the most unlikely of places.

An Adventure With Bob

Last week, my wife, Elisabeth, had to go to Destin, Florida, for a six-week surgery rotation because, at age fifty-six, she is studying to become a physician’s assistant. Destin is 360 miles west of our St. Augustine home, making it a not insignificant drive. But the trip was necessary, and by Saturday afternoon we were heading west. By Sunday, Elisabeth was ensconced in the school-owned condo and ready for her first day in the OR – and it was time for me to go.

I have to admit, I was at loose ends. An eight-hour return journey to an empty house made me feel a little like a lost, middle-aged soul. So I plotted a different route and made for Bodega Bob’s house. It would be an adventure. With Bob, it always is.

Bob lives in Tallahassee, just two hours east of Destin. I knew his company would offer solace, and his house would make for a sweet place to overnight before heading home to St. Augustine.

As I drove, I thought of how significant Bob is to me. He’s been my mentor, my friend, my business partner, and my alter ego. Together, we spent the latter part of the ‘90s and the better part of the ‘00s designing and developing websites, teaching together, brainstorming, and, in general, supporting one another’s efforts in our independent businesses. Then, in the summer of 2008, our world came to an end, and Bob and I became statistics of the financial crisis. Gone were the big website projects. Gone were the clients looking for new ways to promote their businesses. Everyone was scrambling for survival.

Although he suffered the same blows I did, he was the first paramedic on the scene of my life’s disaster. When I decided to ride my bicycle across the United States in an attempt to solve the problem of a fifty-four-year-old guy without a career, it was Bob who urged me on, reminding me weekly that hopping on a bike and pedaling an insanely long distance was the best move a man in my situation could possibly make. While my other friends thought I had traded in all reason for a pipe dream, Bob bolstered me and reminded me that adventure was just what I needed.

As I pulled into Tallahassee and found its Spanish-moss-laden oaks, its azaleas and red buds and dogwoods all in full bloom, I knew I had made the right decision. I rolled down the car window and breathed deeply of a fragrance I had almost forgotten – and then I drove up to the house I had not.

I brought whiskey, of course, and an assortment of snacks, including a large bag of Cheetos to complement the liquor. I wasn’t even out of the car when Bob’s Boston terrier, Rex, trotted over, wagging his tail like he had as a small pup, sixteen years ago. Although Rex’s eyesight is almost gone, he is still amazingly vibrant. In this, he reminds me of Bob and me in our desire to greet the future with our tails wagging.

Bob and I hugged, guy style, which is to say, we banged each other on the back a couple of times. Then we got down to business. Setting up around a fire in his front yard, we toasted our years of friendship. It was then that Bob shared his plans. He would stay in Tallahassee until Rex died, he said, then he is bound for Panama and his “last big adventure.”

I choked a little as he said that. But it is my turn to support him, now, as he supported me eight years ago. So I just asked him to go on, to tell me all about it.

He made a recon tour to Panama, he said, leaning in and lowering his voice as if he were sharing a secret. He found a small island on the Caribbean side. “It’s peaceful there, brother. Not many Americans.” He laughed. “You can’t conjure a McDonald’s, even with the help of the local medicine man.” Then he said, with a serious look, “I don’t want to see another McDonald’s for as long as I live.”

I’ve been thinking a lot about adventure – and I’m not the only one, it seems. Adventure, or the need for it, is heavy upon us. Midlife is the time for such things. It is, at least, for Bob and me, as we affirm life and make plans to keep it interesting. That night, the moon overhead was full and the evening a chilly prelude to the spring that would be upon us in just days. Rex snoring beside us, we two old friends laid a few more logs on the fire and huddled closer to the flames, our moonlit shadows spreading themselves across the lawn.