Life Before the Food Channel 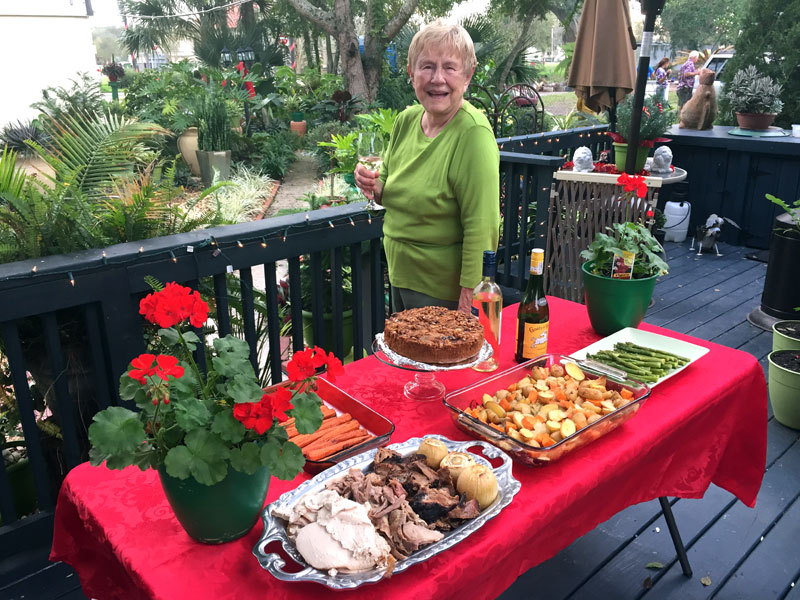 Mom styling at Christmas dinner on the back deck. I’m not the Galloping Gourmet but she taught me how to set a table.

During the past month, I have been busy applying for jobs, attempting to find a new gig that will allow me to work from home – or at least be more local. My mom, who is eighty-eight, now (and, although still a force to be reckoned with), is showing signs that more of my time, assistance, and attention would be welcomed in her life. It’s one of those unexpected turns in the road, for I never thought that the role of caretaker would ever come my way. I always thought that role would fall to my more qualified sister, Debbie. But as so often happens, things change, and the unexpected becomes the routine.

For many years, Mom and I coexisted in a universe that was frankly too small for us to share. Like periodic celestial objects such as Halley’s Comet, we might swing through one another’s orbit on predictable dates – like Christmas, Easter, and Mother’s Day – only to find ourselves colliding cataclysmically. Those collisions were often so memorable that it could take months or even years before we would allow our paths to once again converge.

The Galloping Gourmet – Life Before the Food Channel

But when I was a young boy, my mom and I were pals. Hanging out together was the norm, especially when my dad was traveling – which was most of the time. Occasionally, mom would call my school to inform them I was ill and would not be attending class that day. Instead, we would watch THE GALLOPING GOURMET on television. This was one of the few cooking shows that ran in the early days of television. Long before the Cooking Channel sputtered into existence, long before super stars like Emeril Lagasse, Paula Dean, and Martha Stewart graced the cable spectrum, it was Julia Child and THE GALLOPING GOURMET (Graham Kerr) that expanded American’s appreciation for gourmet food in a time before there was even a Cuisinart. What they presented to us my mom and I, through the magic of television, was an elegant banquet so far removed from our normal life that it often appeared to be locked inside a dream.

On those days when school became the lesser priority, Mom and I would watch Graham work his culinary magic on the old Zenith color set in our den. Then, infused with the fanciful ideas he had placed in our heads, we would jump in Mom’s Pontiac GTO and peel rubber for the A&P. The list of ingredients we acquired rarely resembled any of the items Graham had mentioned, unusual items like shallots or currants or truffles. Regardless, we did our best and, relying on our own powers of recollection and a few notes scribbled on an old legal pad, Mom and I embarked on a special journey into an epicurean land.

Fifty years on, I am thinking of this on a morning when the sun is not yet up, when it’s dark outside and even the dogs are still in their beds. Quietly flipping through pictures on my iPhone, I come across one of my mom on a recent Christmas Day. On this particular Christmas, I had made her a meal like one she and I would have made together when she kept me home from school all those years ago, and it made me remember those times, cooking with her and watching THE GALLOPING GOURMET.

I have told this story many times in my life, and I can now see that it has served to keep me connected to a time when my mom and I shared a deeper bond. The funny thing is that we have once again returned to that place. Whatever events transpired between then and now were simply moments along the arc of an even greater orbit, which is only now making itself known.

Maybe, we really are celestial objects. As individuals, I think we seek our own orbits, and sometimes they take us into deep space, far removed from everything we know. Sometimes, they even take us away from ourselves. Ultimately, however, I like to believe that everyone returns to the beginning – because that is the way an orbit works.

The sun is up now, and, yes, so, too, are the dogs. I try to sit and write each morning on our small sunporch. From there, I have a view of the garden, and it’s easy to keep an eye out for my mom, who lives upstairs. From the porch, I can hear her movements through the old wood floor. She is up now, and scurrying around in her kitchen. Unless she has to go somewhere early, I usually take her coffee, and we visit for a bit and discuss our plans for our day.

This morning, I have a surprise. Besides coffee, I have found a twenty-minute video clip of THE GALLOPING GOURMET on YouTube. In it, Graham Kerr is making Jambalaya.

I suspect we will be making a trip to Publix.